“Emma came to see our 13 year old Labrador, Harvey, while we were on holiday near Hayle. He occasionally receives acupuncture from one of our locals vets at home and Emma kept up his treatment for us while we were away from home. She was a pleasure to meet and Harvey was very relaxed in her care. It seemed especially good for him that he could be treated “at home” instead of having to be taken to the vets.

Emma has been fantastic with Wesley and we are very grateful for making him much happier!

I decided to use acupuncture to treat Wesley’s osteoarthritis because I had noticed his willingness to exercise had decreased despite being on anti-inflammatories, he lacked his usual get up and go attitude. Wesley’s arthritis did not creep on, it was a fairly quick decent where one month he was chasing a ball and the next he could no longer run. Anti-inflammatories have given him some relief, however not as much as I had hoped. After radiographs it was evident that his elbows were suffering and we agreed that it was a combination of factors such as breed, environment and climate, which had contributed to his current state.

I think both Emma and myself were a little worried how Wesley (being a typical over enthusiastic Staffie) would sit for the treatment. It surprised me how calm he was. Wesley seemed to be completely relaxed. He slept and remained calm for the rest of the day following his initial treatment.

The days following were also very calm. He appeared happier and more eager to exercise. He loves my children and he tries to keep up with them whilst they play around the house. He was much more wiling to follow them, which again made him more content. The following sessions also appeared to improve his energy levels, and where he had previously bunny-hopped down the stairs, he now uses alternating strides more fluently. When Wesley had completed the initial course I felt the differences in his overall willingness to want to exercise was huge. When I looked at the results from the Pain Score Questionnaire, I think the results from that are also very impressive compared to his ability prior to starting acupuncture. I would definitely recommend Emma and acupuncture. Emma has been fantastic with Wesley and we are very grateful for making him much happier!

Ivor is feeling much better! 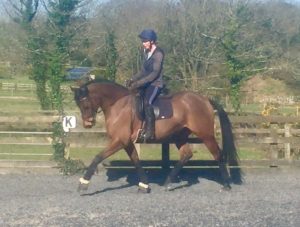 Emma treated my horse Ivor when he was showing signs of sacroiliac pain. I decided to try acupuncture instead of steroid injections and I’m so pleased I did. Emma was fantastic with Ivor and he responded really well to the acupuncture treatment. I saw a noticeable difference in his way of going, he was a lot happier to be brushed and touched in that area and he started to use the correct muscles and taking much more even and regular strides when he was being worked again. After a few weeks of treatment form Emma, Ivor was back in full work; even his regular McTimoney Corley Chiropractor noticed a positive difference in him. I would recommend Emma to anyone and I’m very grateful to Emma for helping Ivor before having to go down the route of injecting!

Find answers to common questions such as “What happens during an acupuncture treatment?” and “How do animals react to the needles?”
Read more here

Find out information about where I travel to, how long an appointment will take, what my fees are, and how I work alongside your vet.
Read more here

I provide Veterinary Acupuncture in Cornwall, am based in Godolphin Cross and work closely with a number of Veterinary Practices in the area.
Read more here

Latest from the blog